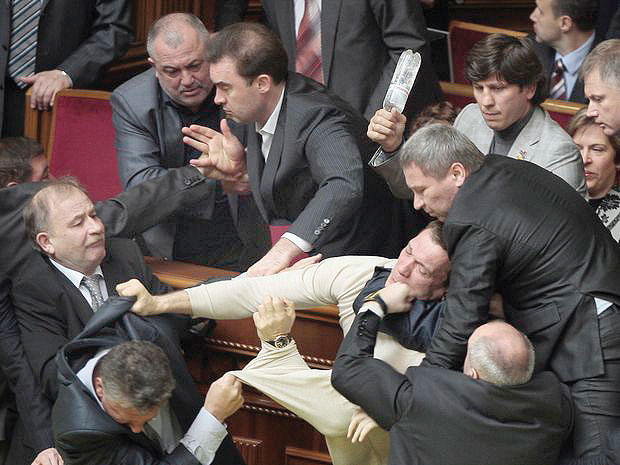 Brawls and scuffles broke out in the Verkhovna Rada on April 27, 2010, when a bill to ratify the extension of Russia’s lease of naval bases in Crimea, known as the Kharkiv Accords, was put to a vote.

KYIV – The Security Service of Ukraine (SBU), the country’s domestic intelligence agency, on March 12 announced that it is investigating former and current government officials for treason related to the extension of Russia’s lease of its Black Sea Fleet (BSF) in Crimea.

The probe was launched a day after the National Security and Defense Council (NSDC) met to discuss eight agenda items, one of which was the so-called Kharkiv Accords of April 21, 2010, when the presidents of Ukraine and Russia signed an agreement for the extension of the lease until 2042.

National security chief Oleksiy Danilov added that “the circumstances under which the agreement” was signed by then-President Viktor Yanukovych and his Russian counterpart, Dmitri Medvedev, would be investigated. In addition, the 236 lawmakers who voted on April 27, 2014, to ratify the agreement would be “scrutinized,” he said.

As a result, the SBU said, “the signing of this document led to an increase in the number of personnel of military formations and special services of the Russian Federation involved in the annexation of the territory of the Autonomous Republic of Crimea.”

Already on March 16, the SBU conducted searches in parliament and its main scientific and expert department, at the NSDC, foreign affairs ministry and Cabinet of Ministers.

“During the searches, documents were found that show that the leadership of the state at the time, before signing and accepting these documents, was aware of their consequences,” the SBU said in a news release.

Russia invaded and eventually seized the Ukrainian peninsula in March 2014, which precipitated the Donbas war in two easternmost provinces a month later that has so far killed more than 14,000 people and internally displaced at least a million more in Europe’s only ongoing bloody conflict.

Eleven years ago, after the agreement was signed in Kharkiv – Ukraine’s second largest city – scuffles broke out in parliament as the Verkhovna Rada convened to ratify the lease’s extension. Lawmakers pelted parliamentary speaker Volodymyr Lytvyn with eggs as he pushed through the vote shielded by umbrellas. Pro-presidential lawmakers guarded the rostrum leading to pockets of brawls erupting in the legislative chamber.

Writing for London-based Chatham House think tank then, geopolitical analyst James Sherr said that Mr. Yanukovych’s move was “shortsighted” and had “compromised important elements of Ukraine’s independence for the sake of internal consolidation and short-term economic and political gains.”

In exchange for the BSF lease extension, Kyiv received a natural-gas discount of $100 for every 1,000 cubic meters purchased from Russia.

The analyst said the agreement ensured “that Ukraine’s relations with Russia will continue to be structured by opaque practices, economic dependency and limited diplomatic and geopolitical options.”

After the agreement, Mr. Yanukovych installed ethnic Russians to head the SBU and Defense Ministry. The country’s military doctrine was amended to downgrade Russia from being the highest national security threat to the lowest and the SBU started cooperating with Russia’s Federal Security Service (FSB). Cooperation with NATO subsequently also was downgraded and a language law was passed that elevated the status of Russian.

Now a senior fellow of the Estonian Foreign Policy Institute at the Center for Defense and Security in Tallinn, Mr. Sherr told The Ukrainian Weekly that in hindsight the agreement “provided a malign backdrop to the encroachments of the Yanukovych ‘family’ on Ukraine’s military assets, the demoralization of its armed forces and the creeping de-professionalization of its security and defense institutions.”

He continued: “this combination of gluttony, complicity and negligence did at least as much to facilitate Russia’s takeover of Crimea as the Kharkiv Accords themselves.”

At that time, a February 2010 poll by the Kyiv International Institute of Sociology found that 67.5 percent of Ukrainians would in a referendum vote in favor of joining a political union with Russia and Belarus. And 61 percent said in a March 2010 poll conducted by the now defunct Research & Branding Group that they would approve the extension of Russia’s lease.

The only high-ranking member of the current and former presidential administration of Mr. Yanukovych is Ruslan Demchenko, who in April 2010 was a deputy foreign affairs minister and currently is the first deputy secretary of the NSDC and an adviser to President Volodymyr Zelenskyy.

It is not clear how any of the former and current lawmakers could be prosecuted because the constitution stipulates that members of parliament are not legally liable for the outcome of voting or statements they make in parliament and its corresponding bodies, except for liability for insult or slander.

A comprehensive strategy for the “de-occupation and reintegration of Crimea” was also approved at the NSDC meeting. Foreign Affairs Minister Dmytro Kuleba said it contains “three pillars,” which include “synergy of restoring international law” and consolidated efforts to advance the Crimea Platform.

The latter endeavor is a “multi-level framework for devising actions that would raise the costs of Russia’s occupation,” an analysis by Washington-based Jamestown Foundation says.

As part of the platform, a summit of world leaders is planned for August 23, on the eve of Ukraine’s 30th anniversary of independence.

Moscow reacted to say that any efforts by Kyiv to return Crimea “are illegitimate,” Russian Foreign Affairs Ministry spokesperson Maria Zakharova said in a briefing on March 15. It “cannot be perceived otherwise than as a threat of aggression against two constituent entities of the Russian Federation,” she added.

Motor Sich back in state hands
Meanwhile, an aircraft engine maker Kyiv considers to be a strategic component of its defense industry will come back under state control, Mr. Danilov said in a briefing after the NSDC meeting.

A Chinese company has pursued ownership of Zaporizhia-based Motor Sich since 2009 as it seeks to address its inability to design and build reliable military jet engines. The U.S. has opposed the acquisition fearing crucial technology transfers from the company could enhance Beijing’s military capacity.

In January, both the U.S. and Ukraine sanctioned Skyrizon, the Chinese company that owns a majority of the turbine engine maker’s shares, as well as other companies connected with its wealthy owner Wang Jing.

Established in the Soviet Union, Motor Sich is one of the last aero-engine enterprises left in the world that “could design and build a new engine front-to-back on its own,” Breaking Defense news site wrote earlier this month. It has the capability of manufacturing engines for missiles, helicopters and jets.

In its heyday, before the unprovoked Donbas war with Russia erupted in 2014, about 75 percent of Motor Sich’s exports went to Russia. It had a highly-skilled staff of 29,000, serviced more than 120 countries and generated at least $1 billion in yearly revenue, according to the Center for European Policy Analysis.

However, the U.S. government suspects Skyrizon, whose parent company is Beijing Xinwei Technology Group, of actually being a part of the Chinese military-industrial complex. The suspicion partially could stem from a 2015 memorandum of cooperation between Motor Sich and Skyrizon, which entailed technology transfers to China in exchange for a 10-year, $100 million loan from the state-owned China Development Bank.

Shares in Motor Sich have been frozen since 2017 when the SBU won a court order. In January, the SBU also broke up a company board meeting in Zaporizhia.
In an interview with HBO’s Axios on January 23, Mr. Zelenskyy said he would draw the line at selling a stake in a strategic company, such as Motor Sich.

“The issue is not about China,” he said. “The issue is not even how the shares of Motor Sich were bought under the former president, under [Petro] Poroshenko. The issue is that we do not have the right to sell a controlling stake in the management of strategic defense enterprises of Ukraine to any country… never, at least under my presidency – I’m not here forever…During my presidency, this will not be the case.”

Meanwhile, the Chinese shareholders threatened late last year to seek an estimated $3.5 billion in losses in international arbitration against Ukraine.

The enterprise was privatized in the 1990s following the breakup of the Soviet Union when Vyacheslav Bohuslayev, its current 82-year-old chairman of the board of directors and honorary president, took control over the company. In 2016, he reportedly sold a controlling stake to the Chinese.

‘Oligarchic Class’
After the NSDC meeting, Mr. Zelenskyy said Kyiv is working on recovering money that was allegedly stolen from Privatbank, once Ukraine’s largest private lender that was nationalized after a $5.5 billion hole was found on its balance sheet. Voicing support for U.S. sanctions against its former co-owner, Ihor Kolomoisky, the president said “we clearly see the difference between the concepts of ‘big business’ and [the] ‘oligarchic class.’”

He went on to mention other oligarchs – lawmaker Viktor Medvedchuk, ex-President Petro Poroshenko, billionaires Rinat Akhmetov and Viktor Pinchuk, and Dmytro Firtash, who is wanted in the U.S. on bribery and racketeering charges.

“One thing is important – are you ready to work legally and transparently or do you want to continue to create monopolies, control the media, influence deputies [members of parliament] and other civil servants?” the president asked rhetorically.