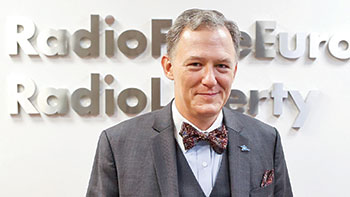 KYIV – A top U.S. State Department official said the United States supports Ukrainian President Volodymyr Zelenskyy’s goal of curtailing the power of tycoons, but cautioned that the path to achieving this “is difficult.”

Mr. Zelenskyy’s Servant of the People party on July 1 approved in the first reading a draft bill – known as “the oligarch law” – that seeks to introduce a legal definition for a tycoon and impose limitations, including blocking them from financing political parties.
The United States has long called on Ukraine to tackle the handful of tycoons who wield enormous political influence from behind the scenes to the detriment of the country and its citizens. However, the proposed legislation opens the door for subjective targeting, critics warn.

“I agree with the goal of ‘de-oligarchization.’ How it’s done is another issue. There are various details and this is very important,” George Kent, deputy assistant U.S. secretary of state for European and Eurasian affairs, who oversees policy toward Ukraine, told RFE/RL in an interview in Kyiv conducted on July 20.

Mr. Kent said that the United States was advising Ukraine on the legislation, but added that the details of the final bill were ultimately up to Kyiv.

“To succeed, to get to this point [of ‘de-oligarchization’], is difficult,” he said.

According to the bill, a person would be designated an oligarch if he or she meets three of four criteria, including holding a near monopolistic position in a particular industry; possessing “significant” media assets; being active in the nation’s political life; and possessing more than 2.27 billion hryvnias ($84 million) in net wealth.

Any person deemed an oligarch would be banned from financing political parties or taking part in the sale of state assets.

While Ukraine has sold off many assets and companies it inherited when the Soviet Union collapsed, it still holds hundreds in its portfolio. Mr. Zelenskyy has said he plans to accelerate privatizations.

Ukraine’s National Security and Defense Council (NSDC) will make the final determination of whether an individual meets the criteria of an oligarch.

The Council of Ministers, members of the central bank, the Defense Council, the Anti-Monopoly Ministry, or the Security Service of Ukraine (SBU) have the right to submit the name of a tycoon for review by the NSDC.

Petro Poroshenko, Mr. Zelenskyy’s main political rival, could potentially meet the criteria, which has raised concerns that the bill may be used to target political opponents.
Mr. Poroshenko, who heads the political party European Solidarity, is a billionaire with assets ranging from chocolate bars to media.

In a May post on the website of the Washington-based think tank Atlantic Council, Mr. Zelenskyy said the sanctioning of his political rival and tycoon Viktor Medvedchuk in February was “just the beginning” of his de-oligarchization agenda.

Mr. Medvedchuk, the leader of a Kremlin-leaning political party who is also under sanctions by the United States, is accused by Kyiv of supporting Moscow-backed rebels in two regions of eastern Ukraine.

His assets in Ukraine, including his media companies, have been frozen and he is currently on trial for treason, charges he calls politically motivated.

“There will be many more such measures until all of Ukraine’s oligarchs are cut down to size and reduced to the status of ordinary big businessmen,” Mr. Zelenskyy said.

Mr. Kent said reducing the influence of tycoons would open up Ukraine’s economy to more investors and entrepreneurs, benefiting the country.

The tycoons dominate key sectors of the economy, including natural resources, and have been accused by critics of blocking competition, including from foreign investors.

“When there is concentration in one hand of not just influence but also access to capital and resources, it does not contribute to the normal development of the economy,” Mr. Kent told RFE/RL.

Ukraine’s corporate-governance image took a hit in April when the government bypassed the authority of the Western-backed supervisory board of state-owned natural gas company Naftogaz and fired its CEO, Andriy Kobolyev.

The United States and Europe blasted the government’s decision, saying it violated the Western corporate-governance standards Ukraine promised to uphold. The Zelenskyy administration defended its actions, pointing to Mr. Kobolyev’s failure to deliver either a profit or production growth in 2020.

“If Ukraine wants investors to put money here to make the economy successful, then they are [also] interested…in the ability to have reliable partners in Ukraine. So, it’s not just the issue of Naftogaz,” Mr. Kent said.