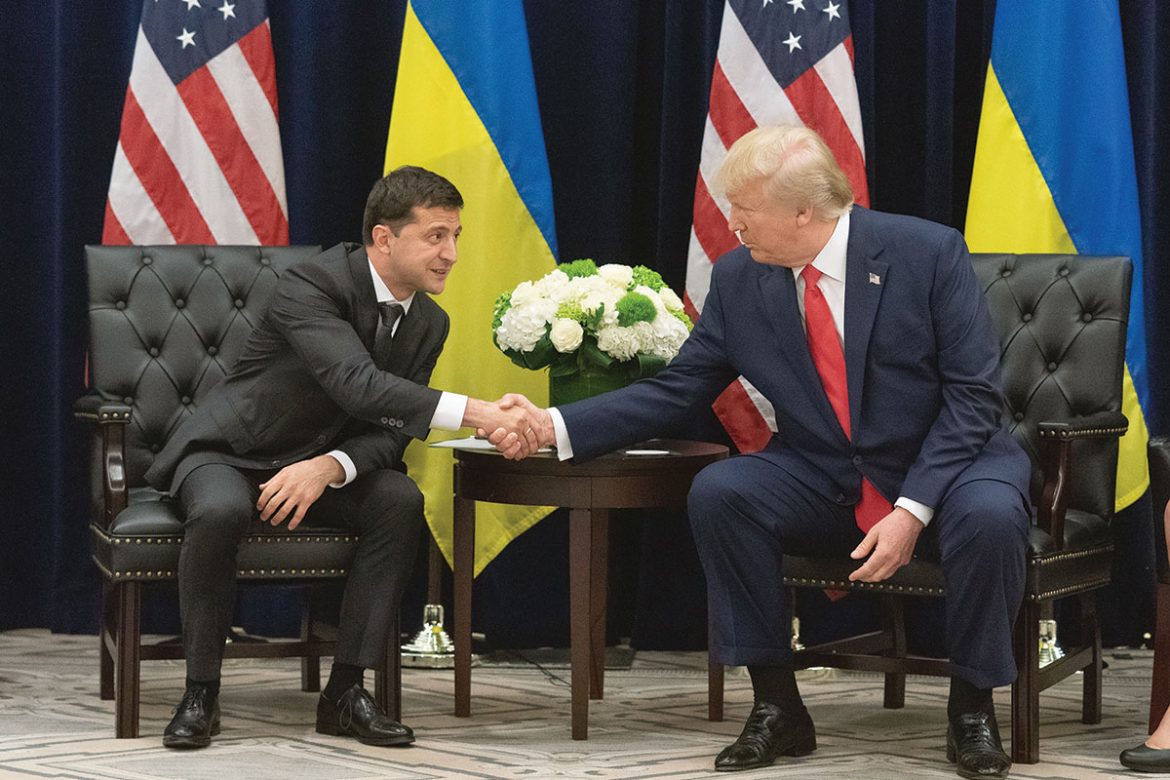 Presidents Volodymyr Zelenskyy and Donald Trump at their joint press briefing on September 25.

KYIV – President Volodymyr Zelenskyy’s trip to New York on September 24-26 for the 74th session of the United Nations General Assembly and events surrounding it witnessed a whirlwind of activity and a barrage of commentary. The question in Kyiv is how has Mr. Zelenskyy emerged from this diplomatic baptism of fire and what it bodes for Ukraine.

It was a very difficult time for the Ukrainian leader to go to the U.S. and the stakes remain high. Given the intensification of the political infighting between the Democrats and the Republicans in the U.S., controversy around the Trump-Zelenskyy connection overshadowed everything else. Understandably, perhaps, but there was also more to it all than this.

For Ukraine’s new president, it was a major test for him personally, for his team and, in a certain sense, for Ukraine itself. Could the novice on the international scene rise to the occasion and make proper use of his appearance on the world’s main stage, and in side meetings with President Trump and other international leaders, to promote Ukraine’s interests and sustain, or even augment, support for his country?

Flying into New York, Mr. Zelenskyy was effectively a proverbial Daniel going into the lions’ den. The Democratic Party has renewed its offensive against the Republican president, once again using Trump’s dealings, direct or indirect, with Ukraine as the basis for their latest assault. Previously, it was the notorious Manafort case; now it is the alleged pressure that President Trump had applied on Ukraine to support his political aims in a recent telephone conversation with President Zelenskyy on July 25.

With the launch by the Democrats on September 24 of impeachment proceedings against President Trump, the latter broke with all previous diplomatic protocol and norms and, in order to defend himself, instructed that a record of the closed telephone conversation be published. He decided to do this notwithstanding the possible embarrassment it might cause the Ukrainian president even as he was in the U.S.

That same day President Trump was among the first to address the U.N. General Assembly. He had plenty to say about China, Iran, Venezuela, Cuba and North Korea, but did not mention Russia, Vladimir Putin or Ukraine. The takeaway for the Ukrainian delegation was not an encouraging one.

Against this background, President Zelenskyy had to put on a brave face and move on with business at hand. As it was too late to engage in damage prevention, the working visit became an exercise in damage control.

On his arrival in New York, the Ukrainian president had meetings with representatives of the Ukrainian diaspora in the U.S., and several foreign leaders, including German Chancellor Angela Merkel and NATO Secretary General Jens Stoltenberg, all of which were reported to have gone well.

That same evening, Mr. Zelenskyy had two other significant unforeseen meetings – an informal first encounter with President Trump and First Lady Melania Trump at a social event, which also provided the first photo opportunity, and a chance preliminary meeting with Russia’s Foreign Affairs Minister Sergei Lavrov. The Russian diplomat reported that he had taken the initiative to approach the Ukrainian president to get to know him and that the two had concurred on the need to reach a peaceful settlement of the conflict dividing Russia and Ukraine.

The following day, September 25, Mr. Zelenskyy was the first on the agenda to address the General Assembly. An apparent idealist and newcomer to the diplomatic scene, Mr. Zelenskyy spoke in Ukrainian and seemed barely able to keep his emotions under control. His address was down to earth, yet sufficiently philosophical with deeper components, patriotic yet universal in scope.

The Ukrainian president chose not to go into details about Ukraine’s predicament, but nevertheless managed to convey the essence of the matter, naming Russia as the aggressor, but diplomatically – in view of pending diplomatic negotiations in the Normandy Four format – stopped short of naming President Putin directly as the culprit.

He nevertheless made his points poignantly on behalf of Ukraine and, through its example, humanity at large. He introduced the human touch by citing the example of the internationally renowned Ukrainian opera singer Vasyl Slipak who was killed by a sniper from the Russian-backed forces in the Donbas in June 2016.

President Zelenskyy told the General Assembly there could be no security in Europe when a war was going on in Ukraine, and he spoke of the broader implications and dangers of this being allowed to happen. Furthermore, he reminded the international community that Ukraine, today a victim of Russian aggression, had in good faith voluntarily given up the massive nuclear arsenal it inherited from the Soviet Union. Given the security guarantees enshrined in the related Budapest Memo­randum of December 1994 that Ukraine received in return, Mr. Zelenskyy said his country expects understanding and support.

President Zelenskyy also urged the international community to face up to the realities and the needs of the time, and to readjust and revamp its institutions so as to remove the flaws, obstructionism and complacency hindering work in preventing wars, resolving conflicts and better serving the interests of mankind.

Having been ignored by President Trump, Ukraine also hardly figured in the statements delivered by other international leaders. In fact, for Chancellor Merkel and French President Emmanuel Macron, both of whom are members of the Normandy Four group with the Ukrainian and Russian leaders, Ukraine seemed to be of secondary concern. Both were seen to be more active in trying to broker new talks between Iran and the U.S.

Mr. Macron did welcome what he called progress in a dialogue between Presidents Zelenskyy and Putin and confirmed that a meeting of the Normandy Four is expected to take place soon.

The exception among the international leaders was Poland’s President Andrzej Duda, who came out with a strong statement of support for Ukraine in its enduring conflict with Russia.

When Presidents Trump and Zelenskyy finally met formally, the result appears to have been satisfactory. At their de facto press conference that followed, the two seemed relatively pleased and comfortable with one another. Mr. Zelenskyy coped well enough with the few questions directed to him. The published transcript of his telephone conversation with President Trump did not turn out to be particularly damaging to him or as troublesome as for his U.S. counterpart.

Clearly, this was not the best moment for Messrs. Zelensky and Trump to be appearing together. The Ukrainian president sought to be tactful and not to upset Mr. Trump. He also sought to convey Ukraine’s concerns and priorities, but in light of the spotlight being on the U.S. president, this proved difficult to do.

“We have two wars,” he said. “The first is against corruption, but I am sure that we will certainly win in this war. However, my priority is to stop the war in Donbas and regain our territories – Crimea, Donbas.”

President Trump’s statement at the press briefing – to the effect that he hoped that Presidents Zelenskyy and Putin would soon be able to work out their differences – was not particularly helpful as it appeared to distance him from peacemaking efforts.

The U.S. president’s comments in the record of the July 25 telephone conversation that Germany and Europe are not pulling their weight in supporting Ukraine – with which Mr. Zelenskyy had appeared to go along, out of politeness it seems rather than conviction – have rankled Berlin. The German press on September 26 fired back, saying that Germany has provided Ukraine with around 1.4 billion euros in support since 2014.

During the press conference, President Zelenskyy was careful to thank the European countries for their support. “It is only together with the U.S. and the EU [European Union] that we can stop the war in Ukraine,” he stressed.

On September 26, the Ukrainian leader met with U.S. business representatives: “My team’s role is not to promise reforms, but to actually implement them,” he told them. “We will not talk about the importance of the fight against corruption or the importance of deregulation – we are doing this today already, although it had to be done yesterday,” he added.

He also met on September 25 with representatives of Jewish organizations in the United States and reportedly received their expressions of support.

In short, although the U.S. and international media have remained preoccupied with the unfolding crisis facing President Trump, Ukraine has become a prominent issue again, whether positively, or as part of the circumstantial background. For different reasons, and not necessarily because of President Zelenskyy himself, Ukraine is back on the radar screen, bringing new challenges but also opportunities. How all this will play out remains to be seen.