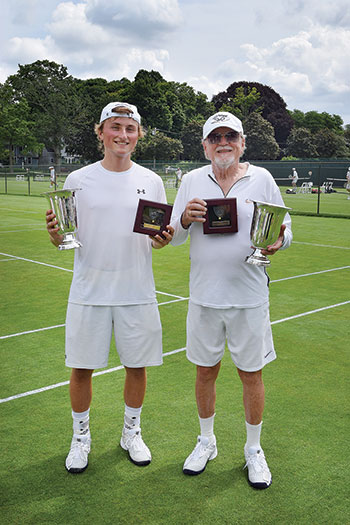 Gregory Olesnycky and his grandfather Zenon Matkiwsky with their awards at the 2015 USTA National Grandfather/Grandson Grass Court Championship.

Dr. Matkiwsky, 83, and Mr. Olesnycky, 21, won the 94th annual championship held at one of the country’s oldest and most prestigious tennis clubs, Longwood Cricket Club in Chestnut Hill, Mass., with an undefeated record, winning some very close matches. They were each awarded the USTA Gold Ball, as well as a trophy. The championship was a non-elimination tournament of the U.S. Tennis Association, with each duo playing all others on a challenging grass surface on July 13-15.

Zenia Olesnycky, one of Dr. Matkiwsky’s daughters and the mother of Greg, commented: “It was extremely rewarding to see how history has repeated itself 37 years later. In 1978 Tato and I won the USTA father-daughter nationals at Flushing Meadows, N.Y., during the U.S. Open. My Tato is now a two-time champion – once with a daughter and now with a grandson.”